When we first start on the path of yoga, we typically start with the poses or asanas; or maybe we like the soothing meditation that can be done throughout the day when we are feeling stressed? Often, we are introduced to one of these two paths before we even realize that there are 8 Limbs of yoga and that there is so much more to it; specifically, the final limb of yoga which leads to enlightenment.

Rainbow Body is what we all would love to attain. It is the level of realization within a person who is completely enlightened, and it releases the body into the light. Our entire practice’s aim is to have the ultimate goal or the Great Accomplishment in mediation which allows us to attain what is known as Rainbow Body. 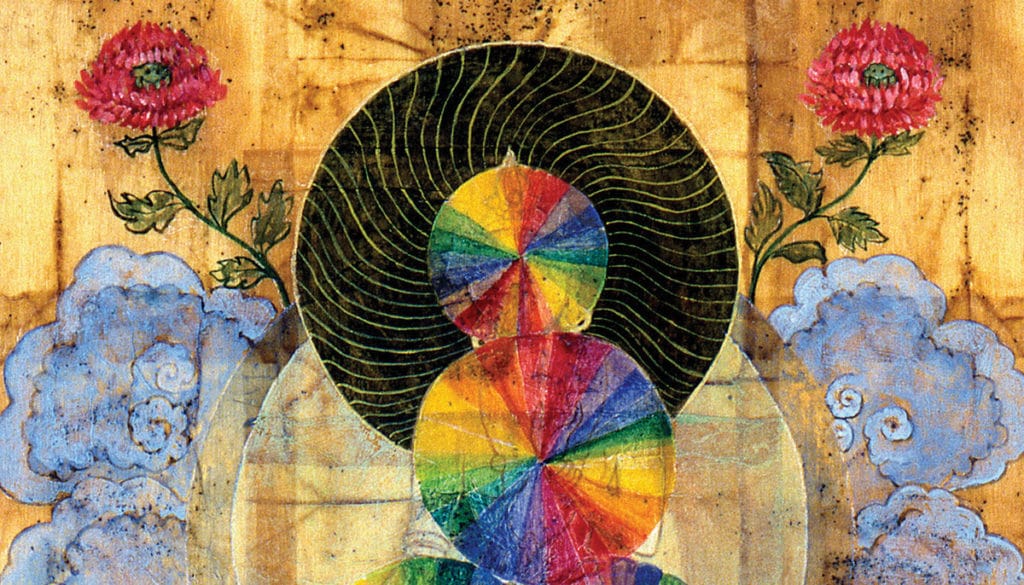 Padmasambhava, also known as Guru Rinpoche, was an 8th-century Indian Buddhist master. It is said that he helped construct the first Buddhist monastery in Tibet and that when he left the world, his physical form dissolved back into its natural elements to leave nothing behind.

When this happened, a new line of Buddhist teaching was created; which would become Nyingma tradition, and which is the basis for the current Tibetan Buddhism. In this tradition, there is the practice of Dzogchen, known as the Great Perfection, the ability to achieve the Rainbow Body.

Dzogchen is an ancient teaching that clarifies who we are, or specifically our spirit, and how we can make our spirit reborn again. It is the most definitive path to enlightenment and is considered to be the final teaching and is essentially what yoga is all about – it is the heart.

The purpose of Dzogchen is to reach self-realization through its teachings and meditation. Once the yogi has accomplished all the teachings and has reached the stage of self-realization, he or she may then begin the final step, which is known as Tӧgal. This concluding step allows the yogi to dissolve his or her physical being into the essence of the elements, much the way that Padmasambhava did so many years ago.

The master yogi vanishes into a body of light; and in turn, embraces the wisdom body, what is known in a variety of terms, that include Ja’-lus or Rainbow Body. When the being is able to achieve this state, it is said that he or she has achieved the reality of the natural state.

The physical body dissolves because it is a manifestation of our impure karmic vision. In essence, it returns to the primordial energetic presence of the Five Pure Lights of the Rainbow Body. Although this may seem an impossible feat, there are documented cases where a master yogi has disappeared from his physical body to leave behind only hair or nails as proof of his existence. The belief is that the nails and hair on the body do not have consciousness in them and therefore the reason why it does not hurt to cut them.

The ultimate state of Rainbow Body is something that many Tibetans and Buddhists follow through the course of their lives; however, it is a state that very few actually attain. Whether you have your own spiritual belief or maybe you follow the path of Dzogchen teachings, the notion that we can reach an end of self-realization and complete our path into the natural state is a nice idea and one which we can all strive to achieve.